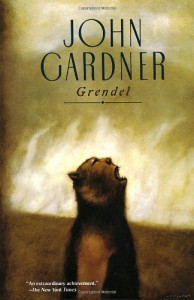 I must say, coming right into this book after having read Beowulf was really quite a jump initially, simply because of the change in styles. But it was such an interesting read, and it was really brilliant and tragic getting to see things from Grendel's point of view. What was even more fascinating was how much time passed before the part that we commonly know from the Beowulf poem, which gives very little on Grendel himself and focuses more on its namesake's journeys.

Still, we get a lot of backstory and insight into the Danes that Grendel was terrorizing, and it reads almost like a reinspired Frankenstein--as I kept making small mental notes about parallels between Shelley's masterpiece and Gardner's Grendel. I even saw the moment where my brain pulled out a correlated scene from the movie Megamind and Grendel, when Grendel makes the conscious decision to play his role of the bad guy since he'd so been deemed by the rest of humanity.

It was a very emotional rollercoaster, even without any tear-jerking moments. It read very much like philosophical tragedy, and it fulfilled the role of one well. Even in Grendel's most grotesque and cruel moments, his decision-making is the kind almost any reader can connect to, even if we're disgusted by what Grendel does. The reality of why he does it hits home clear as sunrise in the flatlands, and makes for a--not necessarily "predictable"--story, but one that doesn't surprise us either in the turns it takes.

I found it a very good story, and probably reading this outside of a classroom setting, I'd even say that most people will be able to relate to Grendel and the situation he's in. Especially considering that most people have in some way, shape, or form known what it's like to be that outcast or that person who's had a role thrust upon them that they don't want to fulfill, but that the world tells them they should. It has a lot of re-reading value, I think, and it definitely will speak to most readers.

It's also not shy about handling things frankly, so for some of you that might be a little thrown off by the beginning, just keep reading. It's done this way for a purpose.


On a lightly fangirly note, I must say that the additional insights to characters like Hrothgar and Wealtheow, Hrothulf and Unferth, all of them minor characters or unmentioned in Beowulf was really one of my favorite parts of reading this story. So much more about them was fleshed out, and there are entire stories that could be written about each of these characters if others so chose to focus on them. Gardner did really wonderful there, and I can't express how much interest these minor figures evoked in me as I read through this tale.

Beowulf himself, the hero of the tale that spawned this reimagination, was a strange mix of what I believed was perfectly in character, a disappointing twist (possibly even a twisting out of character, I would go so far as to say), and an overall amazing force given life like none other in the pages of this book except for Grendel himself or the Dragon. While it killed my fangirl heart to see him portrayed slightly differently than the conclusions I'd come to make about him through study in my course, it was so intriguing to read his character from a different portrayal. Gardner did such an interesting job of writing Beowulf that it hardly matters that the hero (or villain, depending on how people interpret him) shows up only when the book is about done. In the several pages that he's shown in the story, he makes up for it with a life, a presence, that is truly inspired.


Overall, I've got to say that this book turned out to really be unexpectedly good. I loved the different point of view that it provided me after I'd just finished reading Beowulf, and it brought so much more life and conflicting thoughts to a tale that already has been one of history's most debated pieces of literature. I definitely recommend people pick this book up, whether they know about the Beowulf tale or not yet. But if you've read Beowulf before, then you should definitely give this one a look too. I guarantee it'll be worth it for the insight it provides.